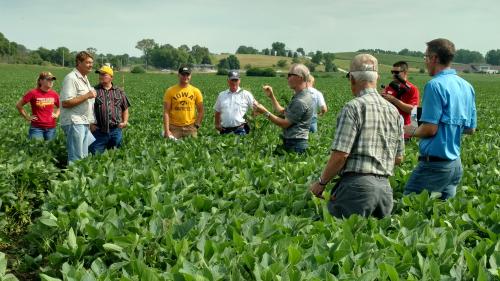 A field day focused on weed management in corn took place on June 18th southwest of Modale, with a corresponding event focused on soybeans taking place July 13th near Logan.  At both events, side-by-side comparison could be made of ten comprehensive herbicide programs, involving preemergence and post emergence applications.  Examples of Palmer amaranth were available for evaluation, with direction on the most effective methods for identification.  Last, results of herbicide resistance screening of weed seeds collected from local populations were shared.

On August 2nd, a group of researchers and representatives from the United States Environmental Protection Agency and the United States Department of Agriculture convened at two Harrison County farms to hear about the efforts of the Harrison County Herbicide Resistance Project team.  This was one stop on a tour EPA and USDA personnel made in Nebraska and Iowa focused on atrazine re-registration and other issues.