What is the Iowa Pest Resistance Management Program?

The Iowa Pest Resistance Management Program is a grassroots, collaborative effort to protect Iowa crops from costly pest resistance that threatens our crop production and our state’s economy. The program is made up of individuals and groups representing all parts of the Iowa community, including farmers and landowners, small and national businesses, scientists, researchers and state regulators. Together, these groups and individuals have leveraged their resources, expertise and time to help inform the public about pest resistance, find new pest management strategies and encourage public support and adoption of these practices.

How can you get involved?

The Iowa Pest Resistance Management Program (IPRMP) was designed for you to get involved. The program features four pilot programs across the state that are working to combat various types of pest resistance. These include: Managing Western Corn Rootworm in Northeast Iowa; the Harrison County Pest Resistance Management Project in Southwest Iowa; Managing Soybean Aphid in Northwest Iowa; and Managing Herbicide-Resistant Waterhemp in Story County. To learn more about the IPRMP and the pilot programs, check out the Q&A here. To learn how you can lend your support or develop your own community project, please email isuipm@iastate.edu.

Version 1 of the IPRMP is here. 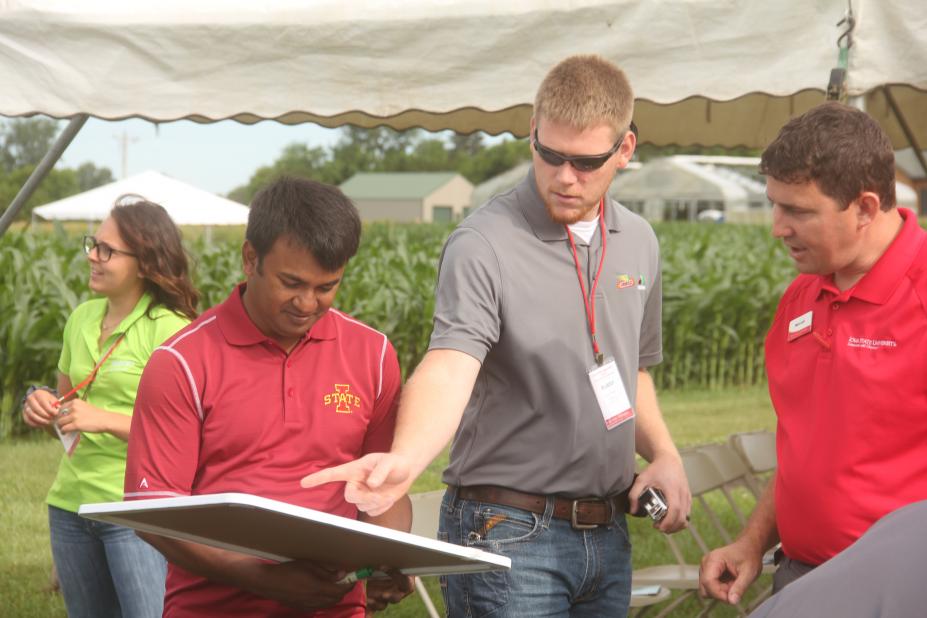 A recently published study in the American Phytopathological Society’s (APS) Pathology Journal, “Perceptions of Midwestern Crop Advisors and Growers on Foliar Fungicide Adoption and Use in Maize” (Sept. 18), explains the various ideologies behind the exponential increase of foliar fungicide on corn crops from the year 2000-2010. The study surveys  certified crop advisors (CCAs) and corn growers across Iowa Wisconsin, Ohio and Illinois.

Fungicide use in the United States increased rapidly during the first decade of the new millennium, despite lack of intense pressure of fungal foliar diseases in corn. According to the study, fungicide use in corn production before the year 2000 in the U.S. was a rare practice; however, by 2007, nearly 10 percent of the country’s corn was being treated with fungicide. In 2010, a report by the Agricultural Resource Management Survey (ARMS), conducted by the U.S. Department of Agriculture (USDA) found that 22.5 percent of planted corn in Illinois had been sprayed with a fungicide.

For background information on the economical and agricultural technology landscape of the time periods being investigated, the report states that fungicides were commercially available to corn farmers since the 1980s. The Farm Crisis was occurring at this point in American history, and low commodity prices and low farm income continued until around 2000, when corn prices began to increase. In 2008, corn price topped out at approximately $6 per bushel. Foliar fungicide use remained a rare practice through 1998, at which point it was mainly used in the production of high value hybrid corn seed. According to the report, “at that time, extension and crop advisors predicted no appreciable change in fungicide use over the next five years, because crop rotation and hybrid resistance would continue providing economically acceptable levels of disease control.”

However, this prediction did not come true. At the turn of the millennium, the mass adoption of shorter crop rotations and reduced tillage increased residue-born disease presence. Gray leaf spot (incited by Cercospora zeae-maydis) in corn was propelled — as predicted by researchers, according to the study — from the “sideline to international status.” An uncertainty in being capable of predicting foliar disease outbreaks was also on the rise, as corn prices began to trend upward. Around this time also came the registration of quinone outside inhibitor (QoI) fungicides for corn. The mass marketing of these products to farmers was integral at this time, due to the mechanism of which QoI’s worked. These types of fungicides were able to last longer in direct sunlight, and had activity against  a broad spectrum of fungi Perhaps more intriguing than the aforementioned benefits were claims that this class of fungicides could boast plant health benefits, such as green leaf longevity and improved stalk strength.

The study sought to understand CCAs and corn growers’ perceptions on fungicide use during this time period, as well as measure the average perceived benefit and/or consequences of this increase in fungicide use. Increased fungicide use with no increase in disease pressure went against researchers’ observed behavior of corn farmers, whose decision making has been very much dependent on profitability. These findings also go against the practices of integrated pest management (IPM), which urges responsible pesticide use through information-based decision making and multiple other management tools for pest control. The report states that multiple university trials across the U.S. Corn Belt had shown inconsistent profitability under low foliar disease severity.

The survey was sent to 188 CCAs and 188 corn growers in each states, totaling 1,504 individuals. The survey response rate was 47.4 percent. From 2005 through 2009, 73 percent of all CCAs recommended the use of a foliar fungicide on corn. Just 35 percent of corn growers applied foliar fungicide. Of this total, 84 percent were applying a fungicide for the first time. 68 percent of CCAs who recommended spraying had done so for the first time. When it came to ranking threats to corn production, weeds were the number one concern (90 percent by CCAs and corn growers), followed by insects and then diseases. The perception on behalf of corn growers when it came to disease impacts on yield loss varied among the states evaluated, however the study did not examine the disease pressures and other circumstances in each state.

When asked to rank corn production factors from most to least important, approximately 23 percent of respondents ranked the use of foliar fungicide as being “very-extremely important”. The top four factors were maximizing profit, yield, commodity prices and plant population, followed by “other factors” (which includes trait resistance and Roundup Ready seed). Those who held disease as more important to impacting yield loss were more likely to perceive foliar fungicides as more important.

Upon reviewing the data collected in the study, researchers concluded that corn growers struggle with “balancing the conflicting roles of environmental stewardship and successful businessperson. In reality, short-term profit-making trumps the environmental stewardship role.”  Researchers further concluded that the use of fungicide in the absence of disease pressure, while disagreeing with IPM protocols, was seen as a form of insurance to protect yields with commodity prices spiking in the period examined. Since fungicides at this time covered a broad spectrum of fungi while also boosting plant health, the cost might have been worth the investment. The survey indicated that, on average, farmers observed yield responses above the break-even point. Though CCAs are influencers, and were more likely to recommend fungicide if they perceived disease to be important, corn growers were more skeptical, and viewed disease resistance as a seed trait/treatment to be more beneficial. Given the current state of commodity prices, it can be inferred that prices per bushel will influence growers’ attitudes toward using a fungicide.

Since being brought to market in 1974, glyphosate has become the most widely used herbicide in the U.S. From less than 44 million pounds used annually in agriculture in 1995 in the U.S., to over 253 million pounds in 2015, the herbicide has become a heavily relied on weed management tool. This can be explained through the advent of glyphosate-resistant row crops, which allowed growers to commit to using the herbicide on weeds without causing any damage to plants. The conventional usage of glyphosate has resulted in numerous incidences of weed resistance to the herbicide over the last decade.

In order to understand the evolutionary outcomes of weeds subjected to strong, continued selection as a result of prolonged glyphosate use in row crops, researchers from both Iowa and Ohio examined the variations of resistance in self-pollinating Conyza canadensis (horseweed). Their research was published this past summer in the Nature Scientific Reports journal. Researchers chose to focus on horseweed due to the fact that this weed has become prevalent among low-til to no-till crops. Horseweed has become a problem in fields due to the fact that in tillage cropping systems, seeds could not germinate in the low tillage depths. With the availability of glyphosate-tolerant crop breeds, low-till to no-till cropping systems could be implemented, which increased horseweed germination rates. Glyphosate was a widely adopted herbicide used to kill horseweed, which has resulted in high resistance rates. Glyphosate resistant horseweed was first reported in Ohio and Iowa in 2002 and 2010, respectively.

Researchers collected seeds from a single maternal plant from 74 biotypes from six north-central Ohio counties, and 74 biotypes from 32 southern Iowa counties, from agricultural and non-agricultural land (parks and ditches). Researchers targeted counties with large areas of soybean production and known horseweed populations, due to the the weed’s problematic rise in no-till soybean fields.

This procedure was used because maternal seed families are expected to be full-siblings due the fact that horseweed self-pollinates, virtually making copies of itself, to very high representing evolutionary units on which selection for herbicide resistance can act.  These seeds were then germinated and grown, and then sprayed with various rates of glyphosate, and the rates of tolerance to the herbicide were measured.

Results from the study show that nearly all Ohio agricultural biotypes of horseweed (approximately 76 percent) were classified as R4 or extremely resistant (the study ranked tolerant varieties on a scale of 1-4, with R1 being least resistant to glyphosate exposure and R4 being extremely resistant to glyphosate exposure), as were 62 percent of biotypes from the non-agricultural sites. In Iowa, glyphosate resistance levels were more diverse among the seeds collected. R4 biotypes were clustered in south central/southeast parts of the state, where no-till agriculture is more common (R4 biotypes made up only 26 percent of plants). Approximately 45 percent of non-agricultural biotypes were between R1–R4 resistance, with the remainder being susceptible to the herbicide. These results illustrate that horseweed resistance levels to glyphosate can be very high in both states, and that even non-agricultural sites likely serve as a refuge for glyphosate-resistant biotypes.

The study concludes that there are multiple mechanisms through which weeds can be resistant to glyphosate, with those in the R1 biotype having less mechanisms of resistance than those classified as R4, which allows for horseweed to be more tolerant of the herbicide. These mechanisms for horseweed include reduced translocation and vacuolar sequestration, which would be the common injuries that lead to plant death in glyphosate. There have been other studies that show that some horseweed varieties can actually metabolize glyphosate, which is another mechanism of resistance, as well as target site resistance.

Version 1 of the IPRMP is an Iowa-specific plan that seeks to engage farmers on the issue of pest resistance management with the goal of keeping technology and tools such as pesticides, seed treatments and biotechnology products and native traits available and effective.

The lack of reliable traits to distinguish Palmer amaranth and waterhemp during vegetative stages complicates efforts at stopping the spread of Palmer amaranth across the state. However, both plants should be in full reproductive mode at this time, greatly simplifying the identification of the two amaranths.

While most agronomists and weed scientists prefer to identify weeds using vegetative traits, the small bracts (modified leaves) associated with flowers of Palmer amaranth and waterhemp are the most, if not only, reliable way to differentiate the two species. Palmer amaranth has relatively large, green bracts that extend well beyond the other flower parts, whereas on waterhemp the bracts are similar in length to the tepals surrounding the seed capsule. On close examination, Palmer amaranth’s bracts on mature female plants are easily seen protruding from the plant’s seedheads without the use of a hand lens. Redroot and smooth pigweed also have large bracts; however, these species have hairy stems in contrast to the smooth stems of Palmer amaranth and waterhemp.